What types of solar panels are used for home solar installations? 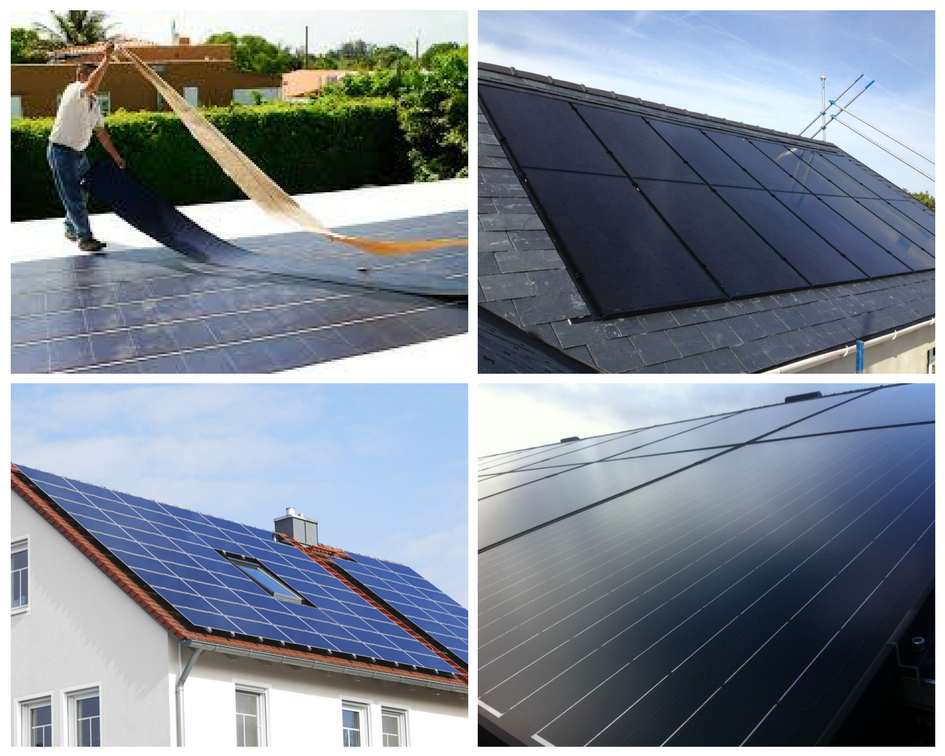 Though all commercial solar panels are similar in appearance, you may be surprised to find out just how many options you have to consider when looking at a solar installation for your own home. For starters, there are both solar photovoltaic and solar thermal operating systems. Solar thermal electric energy generation concentrates the light from the sun to create heat and run a heat engine, which turns a generator to make electricity. Solar photovoltaic panels, discussed herein, convert sunlight to electricity. Those on the market today vary in efficiency, price, styling, materials and applications which can feel overwhelming to the average consumer. This short article will highlight some popular options and guide your selection of the best solar panel to meet your needs.

The main metric governing the performance of a solar panel is its efficiency. Expressed as a percentage, the efficiency describes how well a solar panel converts sunlight to electricity. While many believe the most efficient solar panel on the market is the best, it is important when making a purchasing decision to factor in price, durability, and your own needs. The highest efficiency panel may not be the best value.

It is also important to distinguish between setting a maximum efficiency record and maintaining a consistently strong average efficiency. At present, the efficiency of commercial solar cells ranges from about 15 – 22%. Improving efficiency is an ongoing goal for researchers, so expect to see these numbers climb in the coming years. Emerging fields like nanotechnology are already having an impact on efficiency values.

Crystalline silicon cells are composed of seven basic layers, starting with a transparent adhesive that holds a glass cover over an anti-reflective coating. Beneath these elements are several silicon crystal layers where the photovoltaic effect occurs. These components are all sandwiched between two electrical contacts (one positive and one negative).

In thin-film solar cells, a photovoltaic material (amorphous silicon, cadmium telluride, or a copper-based absorber, for instance) is applied to glass, plastic, metal, or another substrate. These cells are potentially cheaper (depending on the materials used), but they’re also slightly less efficient than crystalline cells. And, as their name suggests, thin-film cells are lighter and more flexible than their crystalline silicon counterparts. Under normal conditions, both types of solar cells are expected to have roughly equivalent lifetimes.

Black silicon panels are simply standard crystalline panels that have been chemically etched to change the color of the surface. The same principle that makes you regret wearing that black t-shirt on a hot, sunny day means black silicon panels absorb more of the sun’s energy than traditional panels. They are particularly efficient early and late in the day, when the sun is low in the sky.

There are two options for black panels — they either come with black frames and back-sheets or with anodized aluminum frames and white back-sheets. The frame color has very little impact on performance, but black frames are popular as they allow the panels to merge more naturally with the aesthetics of many houses. Some manufacturers suggest that black frames will be more durable because of the protection afforded by an extra coat of paint. In northern climates, snow will also melt more quickly off black-framed panels.

The downside to the black panels is that they tend to be marginally more expensive. That said, solar panels are a large investment intended to last a long time. Though it may seem frivolous, choose ones you like the look of as they’ll be adorning your home for the next 25+ years.

Flexible solar cells that retain the efficiency of traditional crystalline silicon panels are a hot research topic because of the multitude of potential applications. Everything from solar-powered “smart clothing” to solar sails for boats could be driven by this technology.

From a residential standpoint, certain houses, particularly those with flat roofs, cannot support the weight of traditional panels. Many flat-roofed commercial buildings are in a similar plight. Using lightweight panels solves the problem while also lowering the cost and difficulty of installation or removal. These thin panels can also be installed more densely allowing for greater solar-absorbing surface area. Their drawback at present is a lower efficiency as compared to standard panels.

Solar panels are made up of solar cells between a glass surface and a backsheet. Solar cells are traditionally made from blocks of crystalline silicon that are cut into squares and wired in series in a grid. The more cells wired together, the higher the voltage (i.e., capacity) of the panel. Through recent advances in technology, manufacturers now have considerable flexibility regarding how many cells they assemble per panel. The market has consolidated into two main sizes: 60-cell and 72-cell panels.

60-cell panels, yielding about 270-300 Watts of power, are the industry standard. They are slightly more expensive to purchase than the 72-cell versions on a $/Watt basis, but are available with more options for frame color and material. Their smaller size makes them easier to handle and cheaper to install.

In comparison, 72-cell panels have about 310-355 Watts capacity and are less expensive on a unit cost basis. Though a lower price per watt might seem like a no-brainer, 72-cell panels are rarely recommended for residential use. They are heavy, unwieldy and not designed to be man-handled onto sloped rooftops. For homeowners, savings in purchase price can easily be eaten up by the costs of installation.

Bifacial solar panels are designed such that both the back and the front are able to absorb sunlight and convert it to electricity. Though the backside inevitably receives less sunlight, the combination of both sides allows for greater sunlight absorption per area versus a one-sided panel. This technology was initially designed for use in places with primarily diffuse sunlight or highly reflective surroundings, but recent decreases in the cost of solar glass have brought it to the mainstream.

The key is to install the panels to maximize absorption of reflected sunlight. That means using reflective roofing, tilting the panels as much as possible, and minimizing shadows. Bifacial panels are particularly practical on flat roofs and in regions at high latitudes that receive a lot of snow.

Solar technology is constantly evolving. As research dollars continue to flow into renewable energy and new materials and manufacturing technologies emerge, the number of options on the market will only increase. Consider, for example, the recent announcement of Tesla’s building-integrated photovoltaic solution, the SolarRoof. While this may feel overwhelming to the average consumer, the rapid innovation means you are bound to find the perfect solar infrastructure to meet your needs.